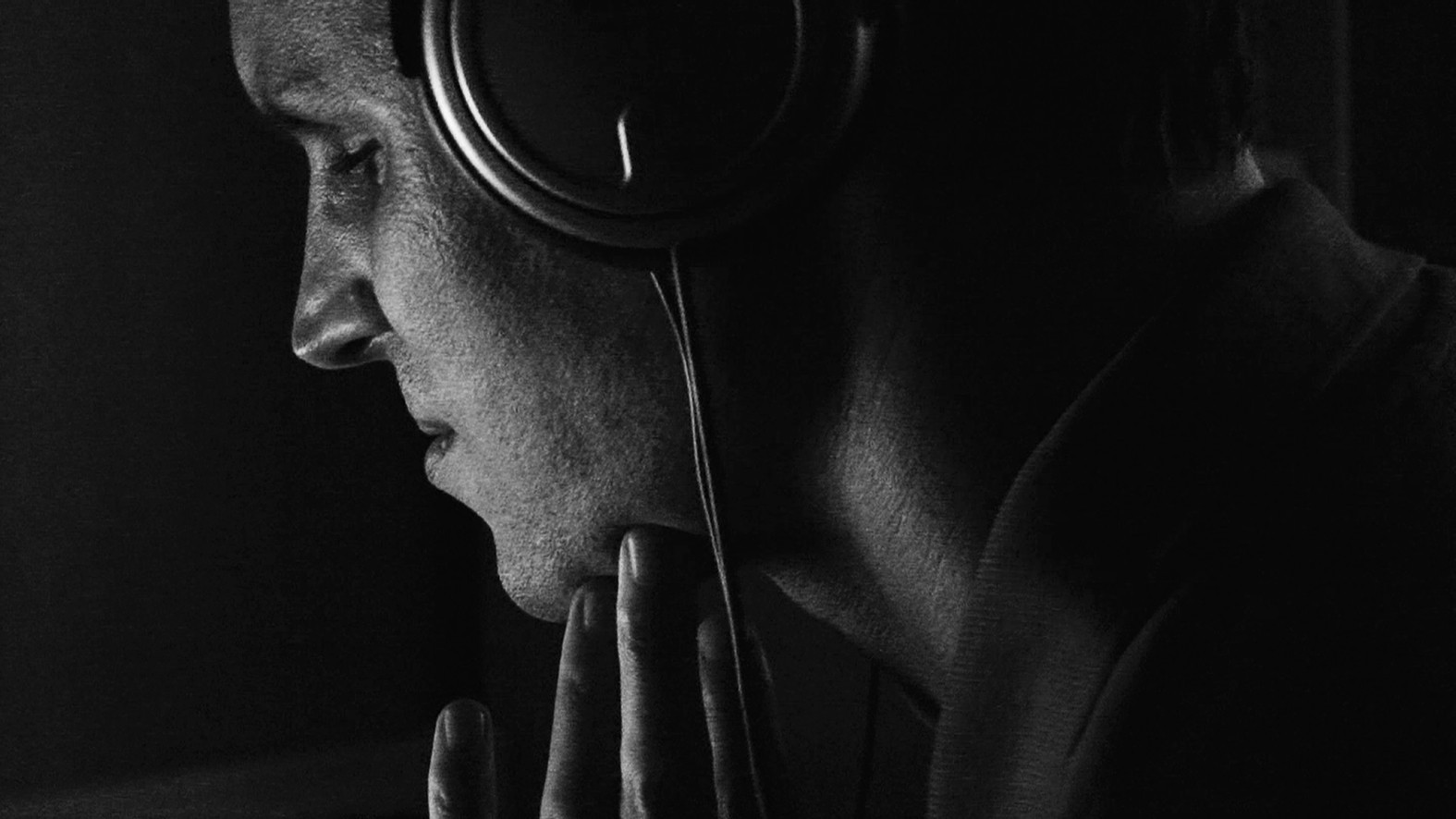 You can download the handout of the exhibition from here.

My only weapon is listening. Listening, in which the power of silence meets the potential of attention to the audible layers. Listening, which is able to reveal what extends beyond the visible layers and to perceive sounds and voices that are masked, hardly accessible or silenced. The leaking noise of suppressed gunshots and beatings, the barely detectable rumbling of violence, of abuses of power and of distorted facts as well as sounds that resist the limiting force of walls or fences.

The protagonist of the video work entitled Sacha (Listening) by Imogen Stidworthy is Sacha van Loo, who works for the Antwerp police and, having been blind since birth, he has highly-developed echolocation skills. He is fluent in seven languages and recognizes several accents and dialects. Sacha puts down and analyses voice recordings made during the surveillance of suspects via telephone: he searches for unspoken intentions and undertones hidden behind spoken worlds, as well as information concealed by utterances, language codes, inflexions and in-between the layers of audible sounds. Sacha’s focused attention and particularly sensitive attitude to the hidden dimension of voices is thus able to identify certain subjects involved in a crime or to provide evidence for a legal case.

Similarly to Stidworthy’s video, in Lawrence Abu Hamdan’s work, the boundaries between private and public space also become increasingly blurred. In his performance-video Walled Unwalled, the walls cease to be real frontiers: neither the walls of a house or a room, nor a thick prison wall that seems impenetrable, can stop the information transmitted by sound waves and vibrations that pass through them, which can even serve as conclusive evidence in legal cases. One of the cases cited in the video is based on acoustic investigations of a Syrian prison building and on testimonies of former detainees under forced interrogation. This prison, like many other prisons built in the 60s and 70s around the world, can be traced back to the prison architecture archetype developed by the GDR, in which the reverberation of sound within the building plays a central role and assists the surveillance of prisoners.

In addition to carceral environments, the acoustic-architectural innovations of the GDR have also been implemented in the design of radio buildings and radio studios. An example of this is one of the radio studios in Berlin’s Funkhaus building, that also appears in Abu Hamdan’s video work. The GDR Radio (Rundfunk der DDR) operated in this building at the time, but the propaganda broadcast from here was not only aimed to the eastern side, but spoke in double directions, as the signal could also be received on the western side of the wall.

Roman Štětina’s video work was shot in another significant radio building of the Eastern Bloc, that of the Czech Radio in Pilsen. The Pilsen Radio Building was the first facility in Eastern Europe built specifically for the purposes of radio broadcasting. The studios, which were designed in the mid-1940s but inaugurated only in 1956, were already considered technologically obsolete when they were completed, because with the advent of audio tapes, the voices of the different characters could be recorded and edited separately, so it was no longer necessary for all the performers and technicians to be present in a studio space simultaneously. The video features an actor who presents one of the studio’s archaic props called a “flap” or sometimes “whip” with a sound imitating a rifle shot. Štětina creates confusion between the audible and the visible, the real and the false by the simple gesture of exchanging the sound of the „flap” for the sounds of real gunshots from a sound effect data bank.

Andreas Fogarasi's works contemplate on upper layers and coverings. With the subtle and delicate attention characterizing his practice, he not only observes but also sees through these surfaces. His photographs depict seemingly ordinary environments, yet they also reflect the structures hidden beneath these exteriors and the processes by which a certain group represents itself, and seeks to shape, transform, disguise, or obscure certain elements of reality. My only weapon is listening. Listening, in which the power of silence meets the potential of attention to the audible layers. Listening, which is able to reveal what extends beyond the visible layers and to perceive sounds and voices that are masked, hardly accessible or silenced. The leaking noise of suppressed gunshots and beatings, the barely detectable rumbling of violence, of abuses of power and of distorted facts as well as sounds that resist the limiting force of walls or fences.

››› Important information concerning the pandemic COVID-19:
For our common protection, it is mandatory to wear a mask or a scarf that covers both the mouth and nose in all spaces of Trafó. If you forgot to bring a mask with you, you can also buy one from our staff at the box office. In some of our public spaces - namely in our cafés - it is possible to purchase and consume foods and drinks, however we kindly ask you to wear the mask again after consumption.
Trafó Gallery can accommodate up to 20 people at a time. When entering, please use the hand sanitizer. Please don't forget to pay attention to maintaining social distancing. Trafó's air changing ventilation system is under increased operation. At Trafó Gallery, the headphones used during the period of the exhibition are disinfected several times a day. If you have any other questions about your visit, please feel free to get in touch with us!
The detailed security measures of Trafó House of Contemporary Arts that also apply to Trafó Gallery were introduced due to the epidemic in order to protect the health of artists, spectators, exhibition visitors and employees, can be read via the following link:
https://trafo.hu/en/covid_19_a_trafo_biztonsagugyi_intezkedesei
Thank you for your understanding and cooperation!