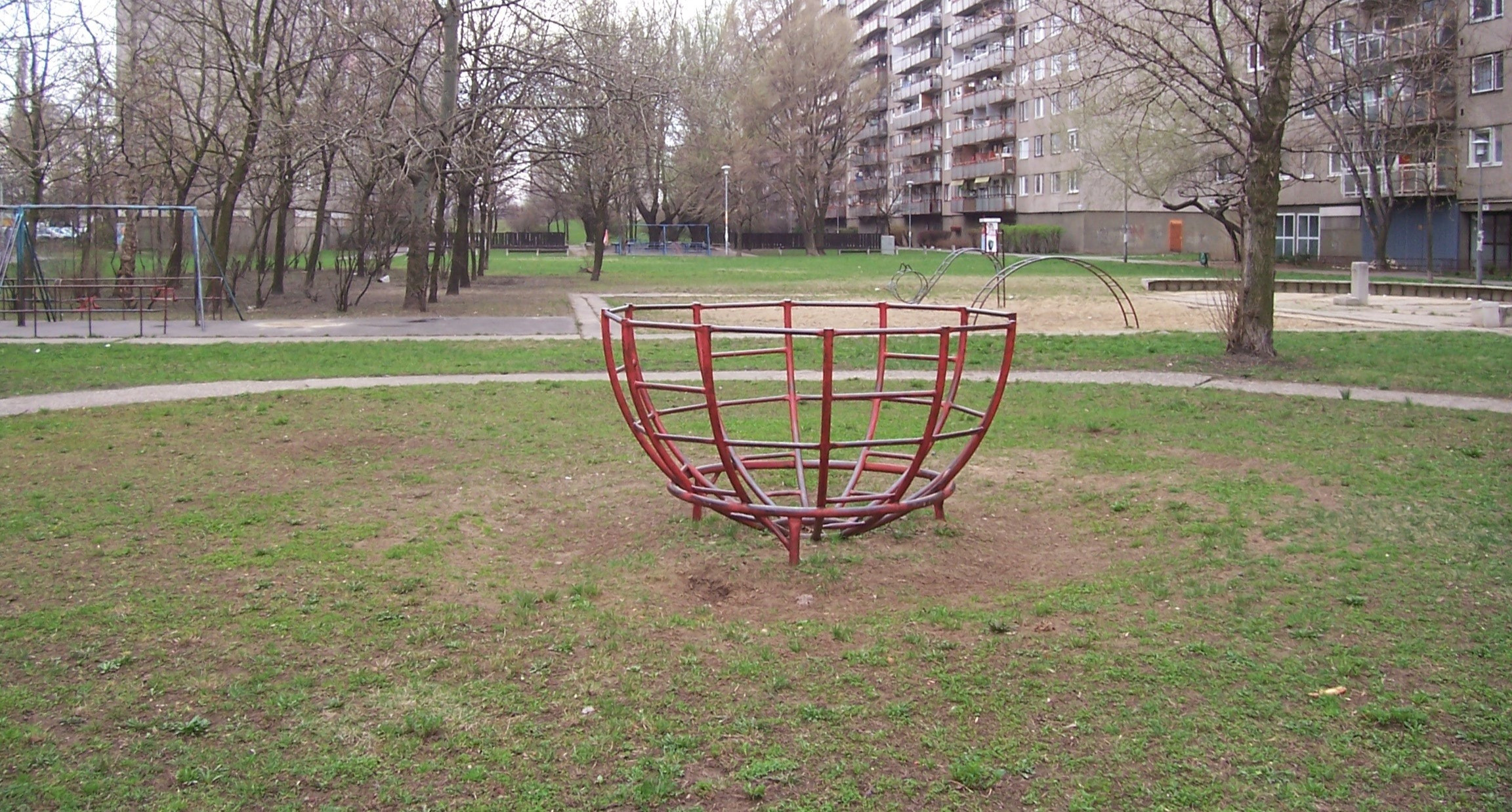 The exhibition explores a peculiar field of East European urbanity – the world of housing estates, the architectural experiments of industrialized production. These manifestations of the 20th century modernism's social utopias offer a rich terrain for artistic reflection. Architecture and its cultural-political dimensions more and more often become the subject of contemporary art – our exhibition aims to map the intellectual context created by the dualities of communal cooperation vs. autonomous artistic activity; social-scientific concepts vs. civil uses; political representations vs. spontaneous identities; utopias vs. localities; planned economy vs. personal latitudes in the context of prefabricated housing estates.

The gallery shows new works of six artists who have been chosen after a call for participation. A dialogue among the pieces creates a network of narratives beyond their own integrity, suggesting further explorations and use in a wider context.

The installation of Balázs Beöthy works with the personal past. One channel plays a discussion of the artist with his childhood friend, recollecting the memories of their games that transformed the housing estate to sceneries of the Wild West. Simultaneously, the other audio channel plays the notes of the artist's father from the same time, constructing a kind of critical social theory. The piece refers to the process of 'inhabitation' of a new urbanity on several layers: the 'historification' of an abstract space, the creation of personal universes in a yet unfinished collectivist utopia, and the critical analysis of the ideologies behind postwar modernism.

The possible strategies of life on a housing estate are represented in the archivist activity of Zsolt Keserue and Levente Polyák, too. The environment they create refers to an apartment interieur, showing personal perspectives, customised details, variations of the uniformed symbolic frame of modern life, the block house and its living units. The enumeration of examples describes the transformation of regulations and basic patterns into an eclectic multitude, a blooming do-it-yourself culture and the traces of diverse cultural backgrounds and personal identities.

The video work of Miklós Erhardt, filmed on the Havana housing estate is also a personal story, this time of an outsider: an artist, renting a vacant shop at the site and trying to build contacts with the local community. The silent, peaceful and contemplative images showing the world outside the shopwindow are in stark contrast with the widespread stereotypes about the place while Erhardt's background monologue reflects upon the difficulties, the failures and limits of the now-popular site- and situation-specific artistic practice, through questions he had faced during the project.

In the video by Szabolcs KissPál, heralded by a trailer through the first ten days of the exhibition, the mission is completed successfully, yet it seems more like an absurd rite. The trying adventure of the monstruous instrument in the staircase of a housing estate, appearing as the requisite of bourgeois lifestyle and as rather strange in its current environment, is a game with proportions, scales, aspects and perspectives. By running various viewpoints parallel, multiple relations are created between object, action and its context, whereby the the urban settings and their imagery also acquire new interpretations.

The group Société Réaliste has been focusing on the relation of architecture, politics and ideology through a series of previous works. Created for this exhibition, their ’cosmographical meditations’, conceived in the framework of their project Ministère de l'Architecture, re-formulates Gerardus Mercator’s description of the world known at the time through an analysis of modern usage of language, suggesting a sort of parallel model. The work establishes intensive and reflected bonds with social ideologies of the twentieth century, illustrating their present-day influence through contemporary examples.

In the work by Marcell Esterházy, the same tradition appears merely as debris, as an automatic praxis of urbanism (automatised urbanistic exercises). Yet this world of architectural typologies created through re-using shapes of wrapping material and thus mass produced to an absurd, almost nihilistic point, invites the audience to play: the rolling quasi-town is freely reshapeable, where anyone can create their quarters of will – thereby participating unwittingly in the interactive history of twentieth century architecture.

Open Tuesday to Sunday 4-7pm and one hour before and after the performances.

The Other City - Screening Program, Part 1 -

„Silberhöhe is an experimental cinematic description of a shrinking city area in Eastern Germany, coproduced by the projekt Shrinking Cities. Silberhöhe places the viewer in the daytime and nighttime of a shrinking city. As in Antonioni's \L'Eclisse\ (The Eclipse) and inspired by the finale, this film is a fiction without protagonists in a pre-fab housing block area. The camera moves around, seeking; the cuts follow an invisible plot. And yet nothing happens and no-one emerges on the scene. (…) The cinema transforms the exteriors of the city into a stage for films that have not been made.”

Clemens von Wedemeyer was born in Göttingen, Germany, in 1974. He studied Fine Arts at the Academy of Visual Arts of Leipzig. He received numerous international awards including the Kunstpreis der Böttcherstrasse in Bremen, Germany (2005), the VG Bildkunst Award for Experimental Film and Video–art, Munich Film Festival, Germany (2002), the Marion Ermer Prize, Leipzig (2002). He lives and works in Berlin and Leipzig, Germany.

Baladrán’s film is based on text and on mostly found footage. Rethinking today the Communist Manifesto, running on one side of the split screen, and the system built up in the name of it, the film reflects on revolution, utopia, construction and destruction.

Zbyněk Baladrán was born in Prague in 1973, studied art at the Academy of Fine Arts, and art history at the Charles university in Prague. He is co-founder of Display, Space for Contemporary Art. Finalist of the Jindrich Chalupecky Award in 2005. He lives and works in Prague.

“\Kultur und Freizeit\ consists of a series of videos about cultural and educational centers in Budapest. Based on the tradition of nineteenth century worker’s clubs, these began to be built throughout the city in the nineteen-fifties and were used for education, enlightenment, and distraction of the working masses. An important part of the unofficial cultural scene of the sixties, seventies, and eighties however also developed to a certain extent within these rigid structures. The general conditions of these institutions have changed radically since 1989: many had to close their doors, while others are still fighting for public support and paying visitors. The architecture of these buildings speaks of programming, the aesthetic and structural ideas of their builders and users, and asks which spaces for culture we claim, how they represent themselves, and which culture we actually mean.

\A Machine for\ is the first part of the series and shows the \Óbudai Müvelödési Központ\ built in 1975 by the architect György Kévés. It is an elegant Miesian box with movable walls and a sliding roof that is among the most interesting yet relatively unknown architectural structures of that time in Budapest.”

Andreas Fogarasi was born in Vienna in 1977. He studied art at the Akademie der Bildenden Künste and architecture at the Hochschule for Angewandte Kunst, both in Vienna. He is a co-publisher of dérive - Zeitschrift für Stadtforschung. He lives and works in Vienna.

Filmed in the outskirts of Leipzig, this work portrays the transformation of an urban area built-up throughout the twentieth century. Its buildings, a derelict Nazi barrack, a huge housing estate and an artificial pond mirror certain periods of the century’s history and are in the state of slow decay. Even demolition, though already decided, seems deferring. The city’s new policy offers inexpensive land to interested citizens, mostly coming from the housing estates, to build their own family houses. Private property instead of collective ownership, rough do-it-yourself capitalism instead of forced ideologies, state care and regulation.

From My Window is a work composed of footage taken by the author from his apartment situtated in a housing estate in Lodz between 1978 and 2000. The loose narrative tells about the neighbours, recalls everyday happenings, and the little stories and examinations made by simply peering out of one’s window reveal the recent history of the town. The images depict the slow changes of the lot in front of the building so that its ultimate disappearance marks the end of the film, too.

Józef Robakowski was born in 1939 in Poznan. He studied art at the University of Torun and film directing at the Theather and Film Academy of Lodz. He has created films, photographs, videos, video installations, drawings, objects, conceptual works and has been active in art theory and as an editor. Lives and works in Lódz.

“In their works, Mona Vatamanu and Florin Tudor examine the living conditions in postsocialistic cities. They are especially interested in the question of how political and economic systems create, define, and inscribe themselves into spaces.

The Trial is a film about a text that seems to be a theatrical performance rather than the transcript of a trial, about the tv journals presenting each evening the new blocks of flats constructed by the socialist regime, filmed from a Dacia car, about how nothing changed with those blocks of flats in the last fifteen years.”

Source and more info on http://www.exapes.org/

“Bahlui is the only river passing through Iasi. The video “investigates” ironically the journey of Bahlui from the moment it enters the city to the instant it gets out of the urban area. The night frames create a metaphysical atmosphere, transforming the gray reality one perceives at daytime into an almost unreal world.”

Born in 1974 in Iasi, Romania, Dan Acostioaei studied art the George Enescu University of Iasi where he currently works as a lecturer. He is co-founder of Vector Gallery and co-organizer of Periferic Biennial in Iasi.

Source and more info on http://dacosti.from.ro/

The total lenght of the screening program is 114 min.