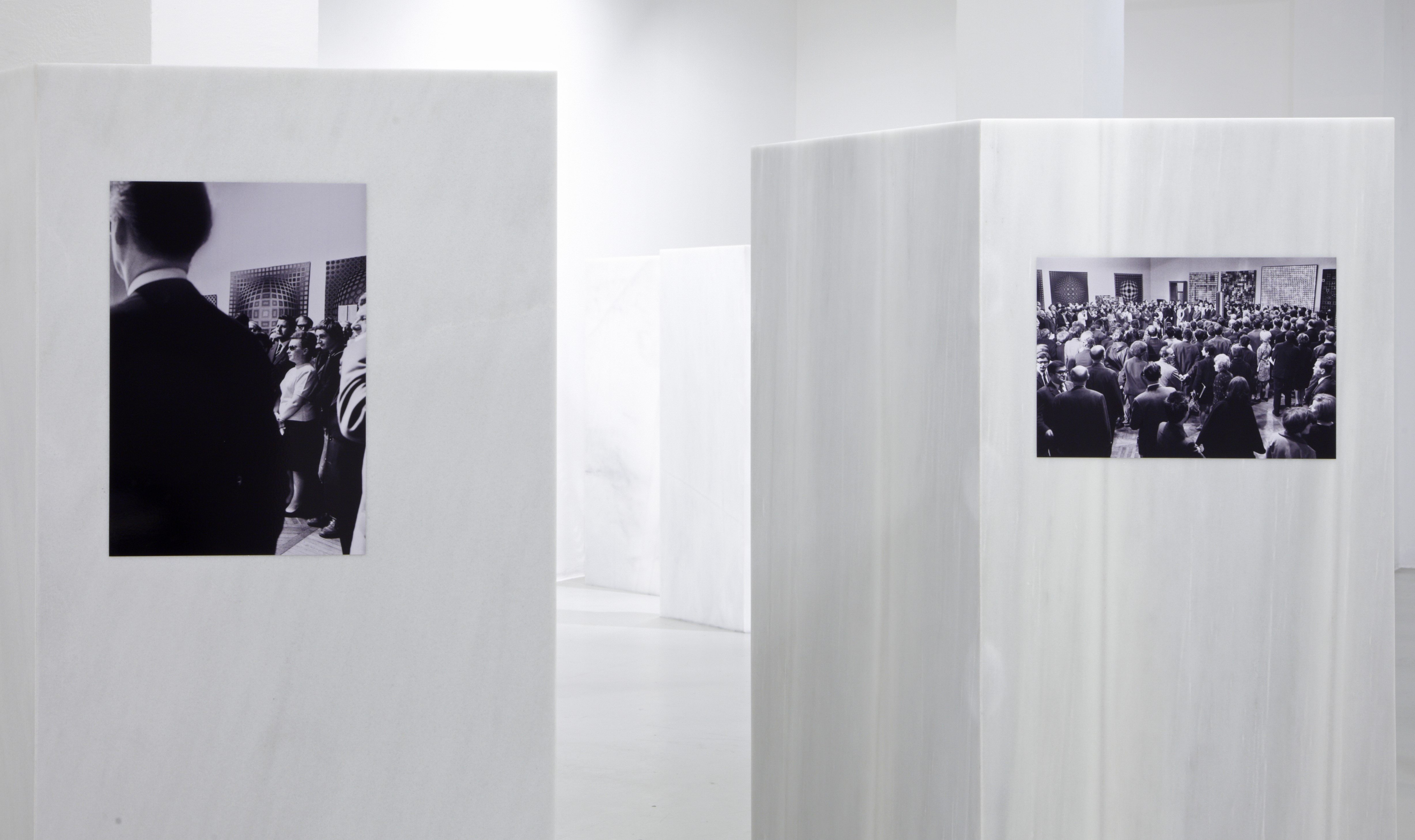 “Vasarely Go Home” is the latest documentary film and installation by Andreas Fogarasi. Produced for his solo exhibition at the Museo Nacional Centro de Arte Reina Sofia in Madrid it is now hosted by Trafó Gallery.

The video and the installation investigate two closely related events, which took place in Budapest on October 18th, 1969. Opening that day, Victor Vasarely, internationally renowned artist of Hungarian origin, had a large retrospective exhibition at the Műcsarnok/Kunsthalle, which was one of the first and biggest official appearances of abstract art in Hungary. Hungarian avant-garde art (comprising abstract art) of that time was at best tolerated by the official Cultural Policy, which on the other hand tried to re-establish active contacts with established artists of Hungarian origin living abroad. So the Vasarely exhibition was met with a good deal of expectation and criticism alike from the local artistic scene.

The second event took place also during the exhibition opening at Mücsarnok as János Major - one of the most interesting (and most mysterious) members of the new Hungarian avant-garde - held a one-person protest . He had a small sign in his pocket reading: “Vasarely Go Home”, which he showed only to friends when no one else was watching.

Fogarasi’s video consists of interviews with artists and other participants of the cultural scene active at that time in Budapest, who talk about the cultural and the political context of the exhibition and the action.

Andreas Fogarasi is the winner of the Golden Lion Award of the 52nd Venice Biennale for his exhibition ’Kultur und Freizeit’ at the Hungarian Pavilion in 2007. Fogarasi’s work is known internationally after solo-exhibitions at among others the Ludwig Forum für Internationale Kunst in Aachen, the MAK in Vienna, the Centro Andaluz de Arte Contemporaneo in Sevilla, the Grazer Kunstverein or the Ernst Museum in Budapest. Fogarasi also participated in numerous group shows in such respected institutions as the ISCP in New York, the MSU in Zagreb, the CAC in Vilnius, Düsseldorf Kunstverein, Palais de Tokyo in Paris, or the Ludwig Museum and the Műcsarnok/Kunsthalle in Budapest. Fogarasi is connected to the hungarian art scene in many ways, he received the award of the Studio of Young Artists’ Association in 2004, and had solo shows at the Studio and the Liget Gallery. Andreas Fogarasi is represented by galleries Georg Kargl Fine Arts, Vienna and Cortex Athletico in Bordeaux.