youth, joy, aeriality
Emanuel Gat together with Awir Leon, producer, musician and performer, created SUNNY as a multi-layered event, juxtaposing a live musical concert with a vibrant choreographic exploration. An explosion of ideas, SUNNY is a flowing free-form merging new sounds with an in-depth questioning about contemporary choreograpic possibilities.

“Emanuel Gat delivers a master piece, SUNNY, echoing Marvin Gaye’s song around which Awir Leon builds in live the musical unfolding of the piece. Gat stays loyal to his way. Beyond the dance itself, which evolves freely to the point of virtuosity, it’s a piece tainted by the relations created between the dancers. Stretches of silence, costumes, games, piercing looks and bursts of laughter create a world overflowing with youth and cheerfulness.” - Ariane Bevalier - Le Figaro

Emanuel Gat was born in Israel in 1969. His first encounter with dance was at the age of 23 during a workshop led by Israeli choreographer Nir Ben Gal. A few months later he joined the Liat Dror Nir Ben Gal Company, with whom he toured internationally. He started working as an independent choreographer in 1994, and ten years later founded his company Emanuel Gat Dance at the Suzanne Dellal Centre in Tel Aviv, with whom he has created several pieces, including ‘Winter Voyage’ (2004) and ‘The Rite of Spring’ (2004), which two have won the Bessie Award. Following this, he settled at the Maison Intercommunale de la Danse in Istres in France, where he created ‘Silent Ballet’ (2008), ‘Winter variations’ (2009), ‘Brilliant Corners’ (2011) and ‘Plage Romanique’ (2014).

Costumes created in collaboration with the dancers 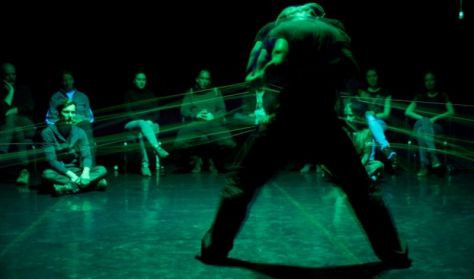